This is what I started with, a photo of two heads and two rocks in a pottery bowl: 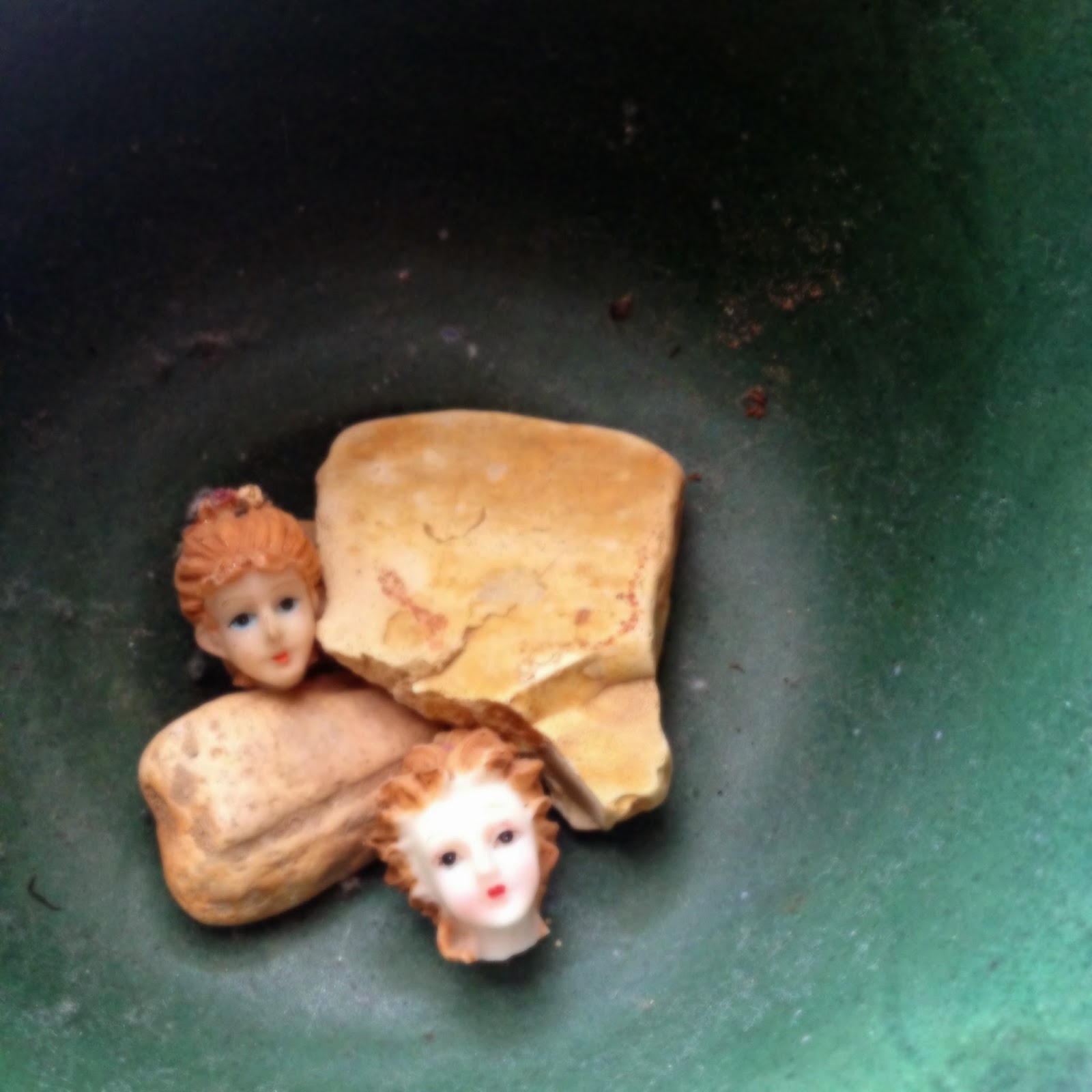 This is where I ended up: 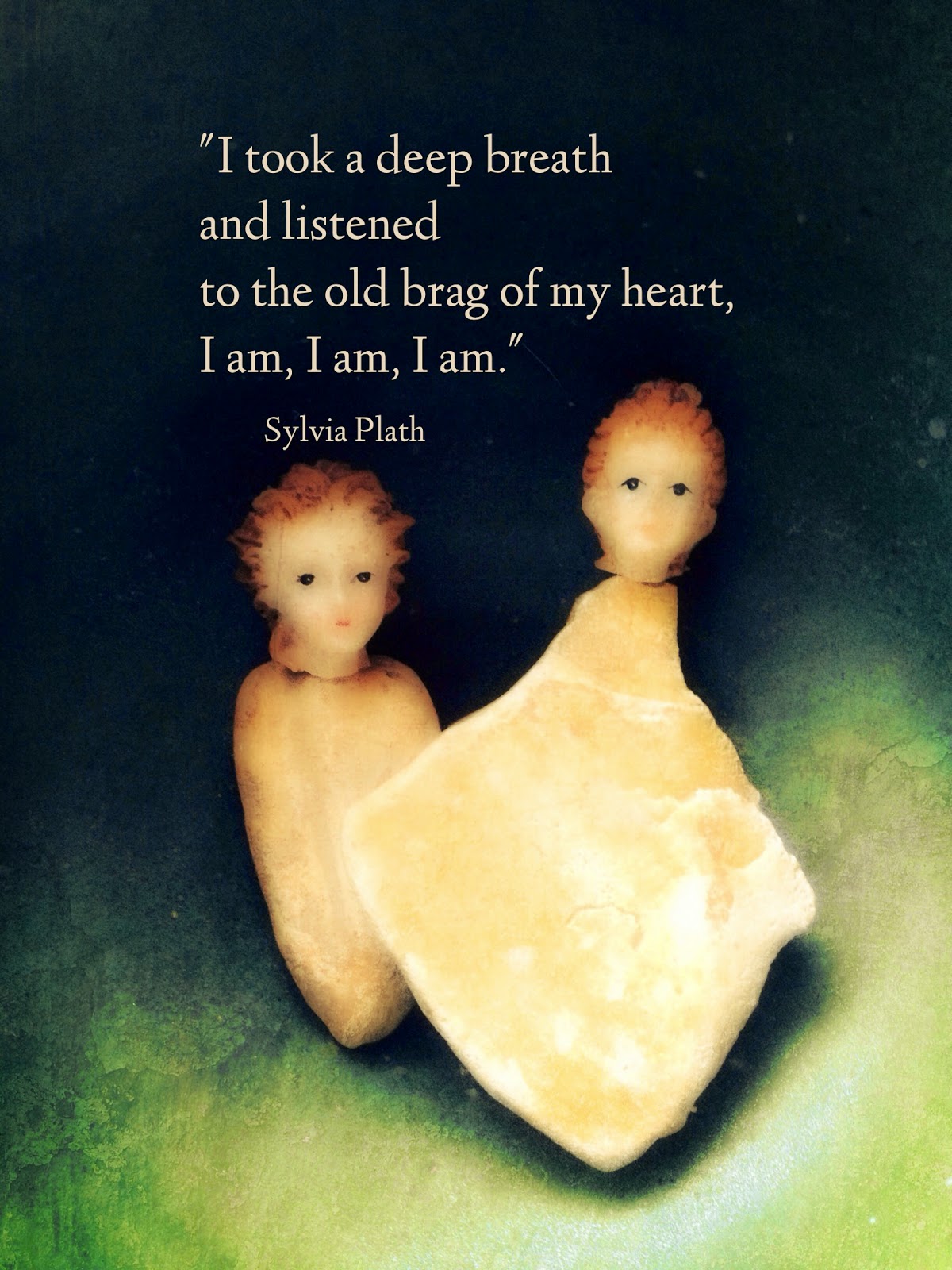 My nephew sent me a text with this quote in it on the morning I was waiting to have my port put in.


It was a reminder to me, that I was still alive, in spite of the battle I was entering. And it continues to remind me that I am still alive. I have, at times, taken that fact for granted, and have not appreciated the life I have.

It's a strange thing, though--let the life you take for granted be threatened and see how quickly your whole attitude toward your life can change.

Suddenly, I see love in my life. I see people who care and offer their own particular brand of support and encouragement. I always knew it was there, but now there is a new appreciation for the connections and the feeling of being somehow held up by the love and kindness of others.

And from somewhere, there comes a new motivation to live better and healthier, and to take care of things in my life that have been too long neglected.

I'm writing this post now on my laptop while sitting up in my bed and looking out on a bedroom that is closer to being a sanctuary than it has been in years. A shelf in the closet has been fixed and clothes that were once stacked all around the room are now hanging in the closet. Clutter is gone, bags of clothing that was too large have been brought to the goodwill store, furniture has been dusted, there is a new coverlet on the bed, and there is a new to me love seat on the side wall that is ready for sitting.

This was one of the things I wanted to do in the new year. There is still work to be done, but there has been a lot of progress made, and for that, I am grateful.

In writing that about there still being work to be done, I recognize a habit that needs to be broken. I have a strong tendency to look at what all I have not done, or how what I have done is not perfect (and in this case, not exactly pristine designer home quality improvement) and to bemoan that "failure," while forgetting all about appreciating (and celebrating) the progress I have made.

(Note to self: Notice and appreciate your progress first, then decide what else you want to do, or decide you have done all you really wanted to do. Stop making the undone things in your life out to be failures.)

It's weird. I'm in the middle of a major storm in my life and yet I feel more alive than I have felt in a very long time.
Posted by annie at 1:15 PM 8 comments:

So, my youngest daughter gave me this "fearless" bracelet with a very nice note about how well I was doing at being fearless, and how my attitude and demeanor in dealing with my struggles has also helped her with her own anxieties.

I love the bracelet and have worn it constantly since she gave it to me (even though, on first sight, I thought to myself "This child likes the bling bling way more than I do!"). Fearless. It is a very nice affirmation. 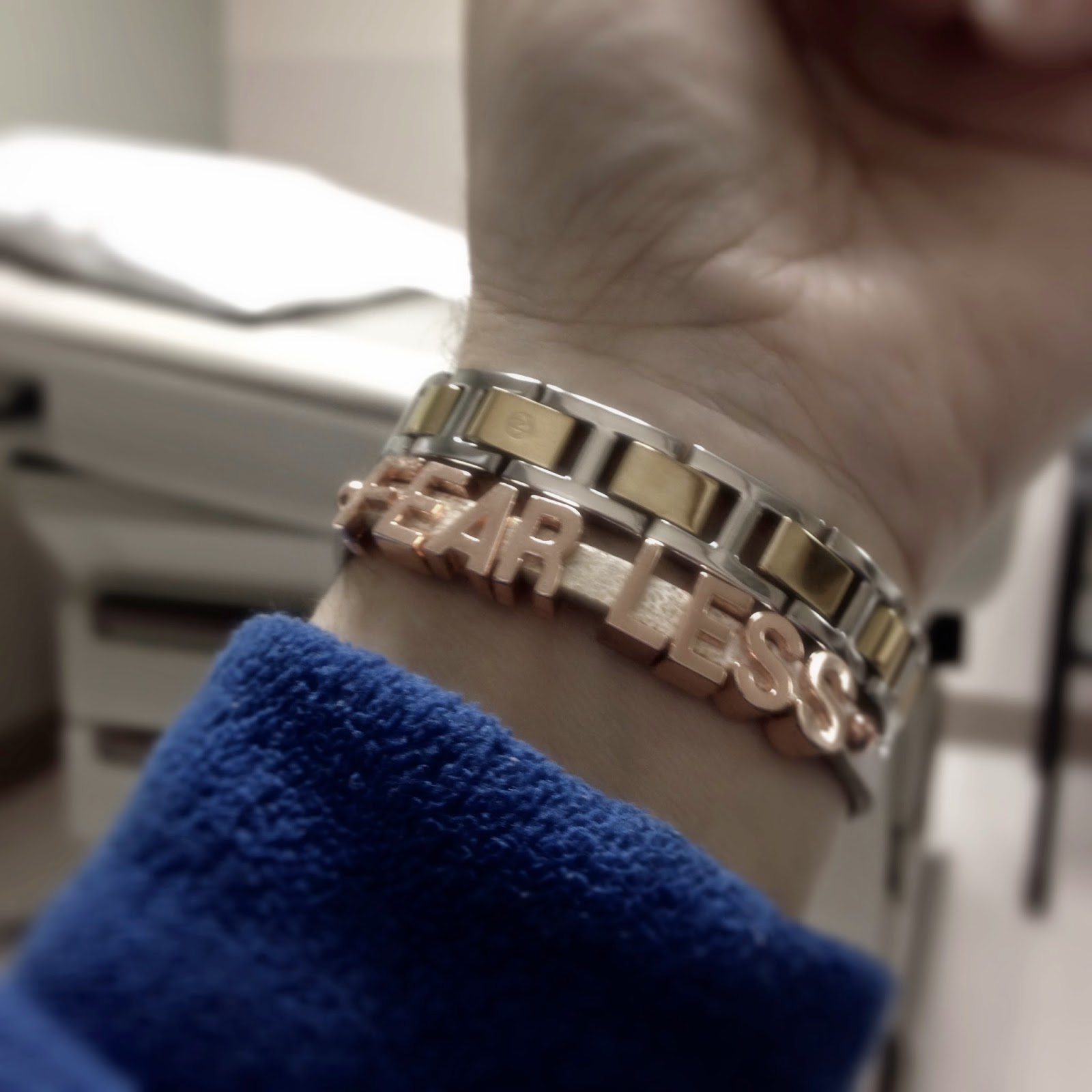 But lately, I've moved from the affirmation to the admonishment: Fear less.

Last weekend, they couldn't do chemo because my platelets were too low. We made the best of it and left Houston to head to our quiet place in the country.

This weekend, I returned and they were able to do the chemo, with a couple of adjustments in the regime. But I am low on iron and need to take iron tablets (or eat spinach, or do both). I found this out when I went for a checkup with my primary care doc, so I was not surprised at this news. But when they started the chemo, the nurse said I was low on magnesium and he had a call in to my oncologist to see if he wanted me to have some added to my chemo treatment. The oncologist said he'd call a prescription in for me.

And then, most troubling of all, I had to see the liver specialist about the possibility of fatty liver disease. He says my liver function is fine, and my enzymes are fine, but there is this one little test they do that measures the amount of scar tissue and that stupid little test says my liver is scarred, which could mean I have cirrhosis of the liver. So he recommended an MRI. An MRI is one of the few things I really hoped I would not have to endure on this journey. So I whined about it to him and he said we could do an ultrasound that would give some indication of how "stiff" the liver might be. If it isn't stiff, I assume I wouldn't need to do the MRI. But if I need to do it, I have two options (options always make me feel better)--I can go somewhere else and have an open air MRI or I can have it done there in the traditional machine and be sedated. Neither option really appeals to me. So I'd appreciate all the prayers and kind thoughts I can get for my liver not to be stiff, for that stupid little test to be WRONG.

They did genetic testing because they thought I might have genes that just made me make tumors. I did not have those genes. They thought I had hepatitis C and now they say it was a "false positive." I guess they have to check everything out, and I guess I appreciate that, but at this point, it feels like a mixed blessing! I think he will have the ultrasound scheduled for the next time I go in for chemo, which will be weekend after next.

At one point, he asked if I was stressed because I was talking faster and faster, and he sometimes did that when he was stressed and I said "Yes, I'm stressed!" He then told me he was not thinking I had cirrhosis or liver cancer and keeping it to himself to come in and bombard me with the news at a later date. I told him I was not worried about that, I was worried about the machines! All he could tell me was don't worry about the machines. But I've got news for him. We fear what we fear, and our fear is not always logical!

In the end, I will do what I need to do, one way or the other. But in the meantime, I am just trying not to fret too much over the possibilities.

So yeah, right now, I can't quite manage the fearless part, the best I can manage is to fear less.
Posted by annie at 7:04 PM 8 comments:

I went shopping this weekend for clothes. I've lost weight and my pants were getting too loose for me to wear comfortably. I'm wearing a size that I have not worn in a very long time, probably since I first got married. It's hard to believe I'm wearing such a smaller size so I have trouble picking the right size, and believing I actually need the smaller size. In fact, I returned to the store today and exchanged some tops because I realized I'd grabbed a larger size out of habit and had not even bothered to see if the smaller size might work just as well, or better.

I am proud and grateful for the weight loss, and it's a nice "problem" to have, but it's a heckuva way to get there. I really didn't do anything to bring it on--my body has made it such that I really have no choice but to comply (or pay a price I do not want to pay for not staying within the boundaries now conscribed upon me by my condition). I've come to consider the weight loss as collateral damage from one of the most unsettling battles of my life.

I can not overeat without pain (mostly minor, but still, discomfort) and gastronomical distress. I now limit my consumption of refined sugar because "they" say "sugar feeds cancer." I try to avoid high fat meals (and have mostly succeeded) because "they" (my doctors) told me to. I've been called up and put on a short leash.

Some might resent that. I might resent that, at times, but only for a short while. Sugar, cakes and cookies in particular, has always been one of my greatest culinary loves. But when faced with the possibility that your bad habits might shorten your life, well, who (in their right, best mind) doesn't want to live? I want to be clear, I am referring to myself alone. There are others who can eat what they want and (apparently, possibly) slide by without consequence, but I have do not have that luxury, and I have, much of the time, a teachable spirit, so I am learning from my experience, and trying to make changes.

For me, there are now these boundaries. And rather than chafe and strain against them, I (for the most part, most of the time!) choose to accept and embrace them as best I can in hopes of coming out on the other side of this trial a healthier, leaner, and freer me. I do not want to waste this opportunity that is ensconced in my momentary suffering. 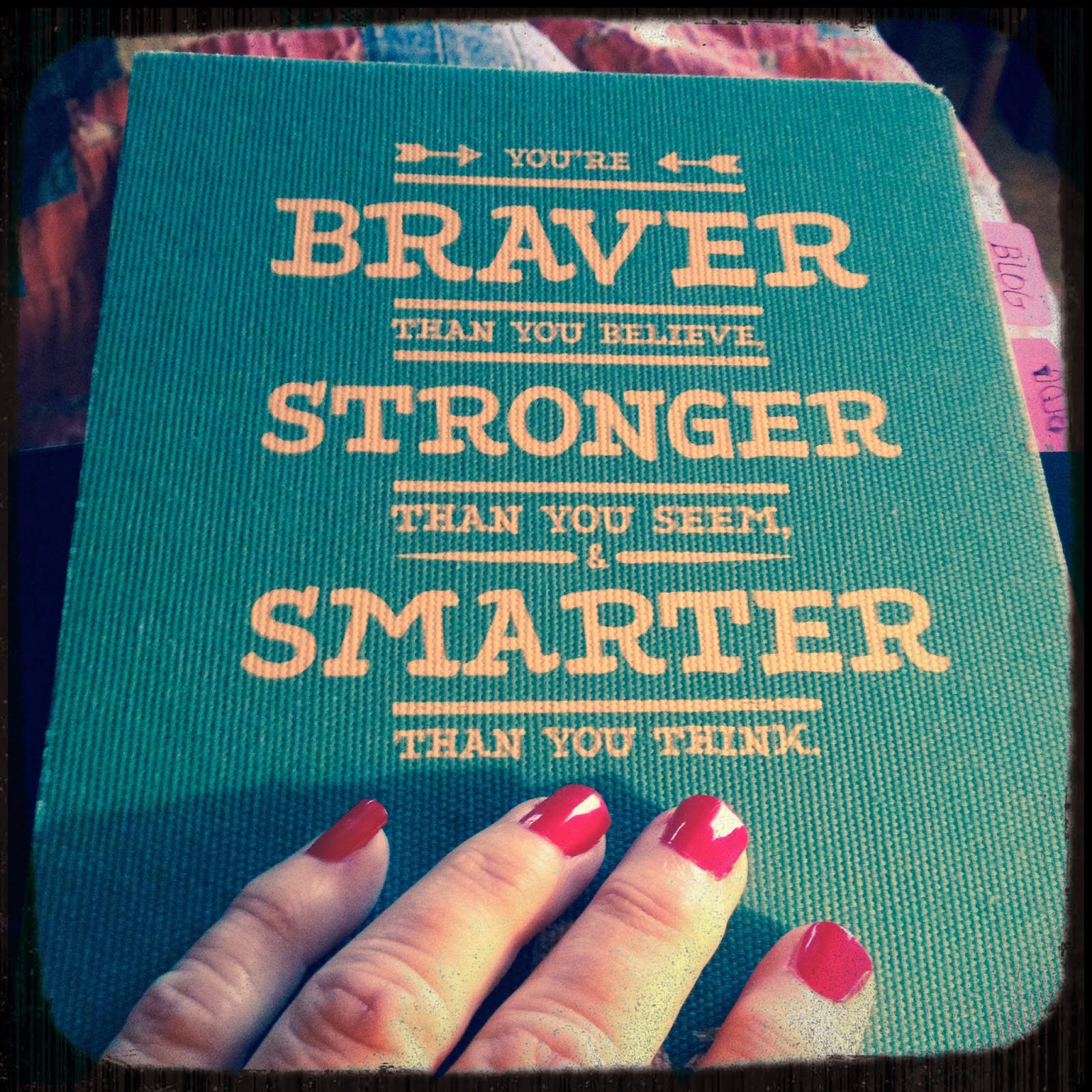 Apparently chemo makes my fingernails grow stronger. Today I painted them. The color is called "Tough Love." It occurs to me that is what I have had to do for my body and myself, practice a little bit of tough love by saying no to some of these things I want that are not good for me.

Also, I don't want to ignore the quote printed on the journal that my short little fingers are resting on. I am brave, strong, and smart. There have been days (years) when I didn't know that so well. But I'm now far more aware of it than I have been in the past. I've had many opportunities to prove it to my very own self.