I've been working on a few arty things over this long weekend. The second pic is more like the original watercolor and lettering looked. I added the blur in one of the apps on my phone. I'm not the greatest with lettering. Today I penciled in the letters and went over them with a black marker pen, then went back and erased the pencil marks. 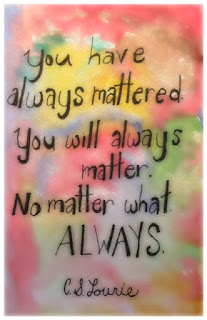 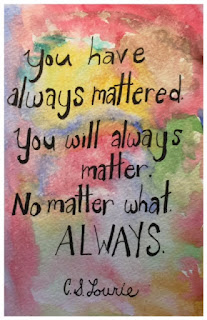 Again, the second pic looks more like the original page I worked on. But I liked the way the black and white looked when I tried it in my phone app. I notice I still have a slant on my lines. I'm clearly not all about perfection! 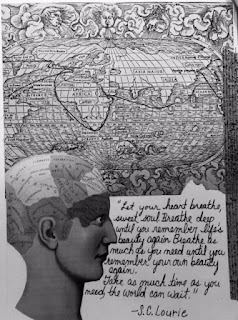 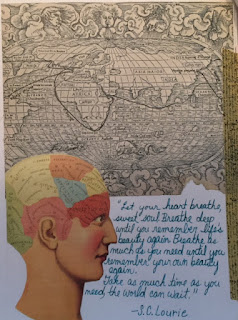 When I was looking at the pic in the photo editor, I noticed I had not crossed the "t" in "wait" so it looked like "the world can wail." I corrected the error.

Harvey is gone but he left an unprecedented amount of damage in his wake. There are so many who are hurting right now. I know of four families whose houses have flooded completely. My nephew and his wife are one of those families. They were rescued out by boat last week and they still have not gotten back in to see their house and start working on rebuilding. The water is still too high. We were holding out hope that the water would not get in their house. Our hopes were severely dashed when my nephew saw drone footage of his neighborhood. The water was up to the eaves on all the houses in that area. They had just paid the first note on their house. The check was probably literally in the mail. It's heartbreaking and the damage is so much and so widespread. They didn't buy flood insurance because their home is not in the 500 year floodplain. The neighbors told them the neighborhood had not flooded in the 35 years they'd lived there.

My daughter has been working with a group rescuing dogs that have been displaced by the storm. That too is hard and heartbreaking work.  I worry about her being burned out. Tomorrow she will go back to her full time job but the rescuing and collecting of much needed items will continue for a long time.

It's not a great photo, but this is the one that sucked the air right out of our lungs. They hadn't even been in the house long enough for me to go visit them, so I can't tell you which roof is theirs. Doesn't much matter, really. They are all obviously flooded to the max. 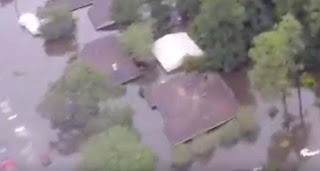 We can go back to our jobs. We have water to drink and flush our toilets. We can cook a meal, or go out to eat. We can sleep in our own beds. The people in Southeast Texas have such a hard road ahead of them. And so many are in the same boat, with water damaged homes and businesses. But by the grace of God they will all make it through. Prayers would be appreciated.
Posted by annie at 7:47 PM 5 comments: