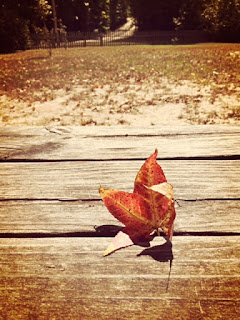 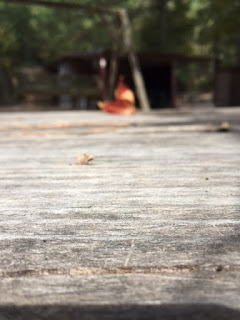 We do get a little bit of fall color here in Louisiana. I am grateful for what we get (I need to write more about this place, it is such a major part of me). 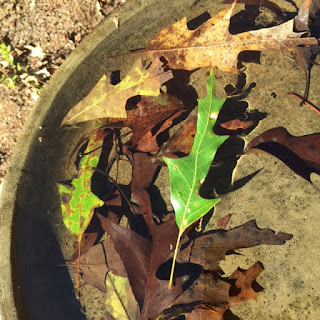 I took a video on this day. The wind was gently blowing the leaf across the surface of the water in the bird bath. At the time it felt like I was listening to the universe breath. All was quiet and peaceful. 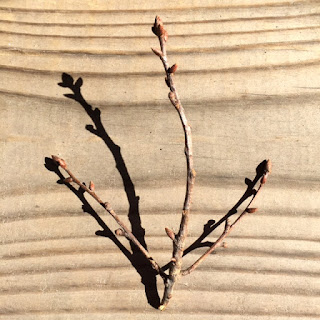 This stick is still sitting on my desk in the country. I'm going to save it for a while and see if I can somehow work it into a piece of art. There's something hopeful about the buds growing in and then the undeniable brokenness of the branch dashing all hope of growth. Life and death on the same little stick. Life is full of such paradoxes. 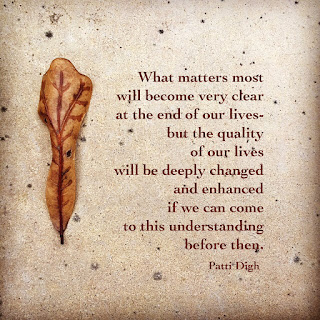 I'm working hard at understanding what matters most to me, trying to discern my voice from all the voices of authority that rattle around in my head. It seems to me I should have "been done" figured this out. On the other hand, we are never totally done with this task. I read a quote this morning that said:

"If in the last few years you haven't discarded a major opinion or acquired a new one, check your pulse. You may be dead." ~ Gelett Burgess 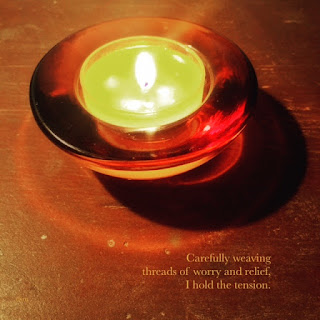 One of my favorite metaphors about life is the one of us holding the tension. I think of my grandmother, and my mother, and myself, sewing, and adjusting the tension that is necessary to keep the stitches even. When teaching me to hem a garment, my mother quoted my grandmother, saying "If you make your stitches too big, you'll hang your toe in them."

I think of my brother, who, when he was young built himself a bicycle out of scrap parts, and apparently, did not have the tension of the chain quite right, because, somehow, the chain slipped off, or locked up, and he tumbled off the bicycle and broke a leg.

There is a tension we must hold (and constantly adjust) as we raise our children. Some of us have to learn that saying "yes" is not always the most loving thing to say. That holds true in more than our parenting relationships.

I held a different kind of tension this past weekend, when I was in Houston for my second three month checkup. I wonder when I will quit numbering the checkups and just call it "my checkup"? My husband, for the longest time after my son died, knew the exact number of days our son had been gone. I suspect he might still be keeping that tally. I remember my son's words on the back cover of a notebook when he was in a rehab facility: "number of days I been here:" followed by his hash marks that numbered the days. We humans do love to count the days and mark our times.

I have to make five years before I'm declared truly cured. For the first couple of years, those years are measured in three month increments. I was particularly stressed this time around, mostly because they had me scheduled to have my port removed. Before I would see the oncologist. I asked the woman at the pre-procedure meeting if they would know my scan was clear and all was well before they took the port out. She said they wouldn't. That bothered me. I dealt with that, speaking to several people throughout the day, and eventually got the port removal changed to take place after seeing the oncologist (which is how the nurse said it was supposed to have been all along).

Sometimes you just can't make nice and do what the "authorities" tell you to do. Sometimes you just have to make a little noise. As it turns out, in this case, everything would have been perfectly okay whether my port was taken out that morning or that afternoon, but we didn't know that in advance and I was unwilling to take that risk. And that's another of the side effects of my cancer: I'm less willing to sit down and shut up and hang on for the ride.

To make a long story short (oops, too late!), my scan was clear and they did remove the port. As of now, I remain in remission, and I am working to let my life be. 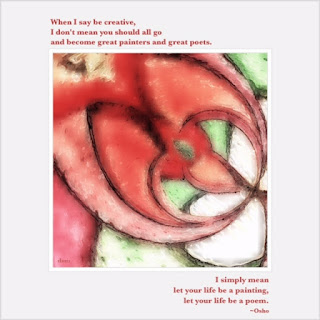 See No Evil, Hear No Evil, Speak No Evil 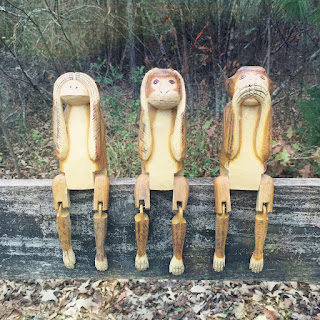 My sister gave these to my daughter as part of her Christmas present. I "kidnapped" them to take their pictures. I like them a lot. But I got to thinking about how dangerous "see no evil, hear no evil, and speak no evil" can be, particularly for people who tend to be "good little boys and girls." If we never see or listen or speak of the bad things, they continue on in the way they always have. That's a harmful thing for the more weak and powerless among us. 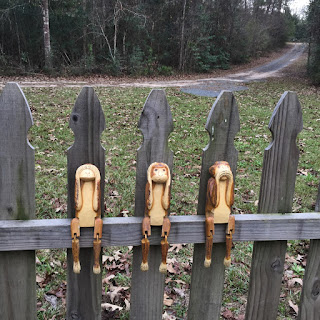 The road in the background leads up and out from our place in the woods. When we leave town and come in to the country, I am relaxed and ready for the quiet. This year, I want to be more aware of what I am taking out from here as I travel up and out the road to head back to town.

I want to live with more awareness. I want to be a calming presence in the places I go. I also want to be more intentional in the way I use my time.

I also want to blog more. And I want to work on a few creative projects. We shall see how I do. :)
Posted by annie at 8:52 PM 8 comments: