Something new I'm trying this year: a (more or less) daily collage that I do in an old calendar. When the week is over, the page is finished. I'm going to try and post each month as I complete them. We shall see how that goes. Maybe this will mean I will at least post something here once a month? 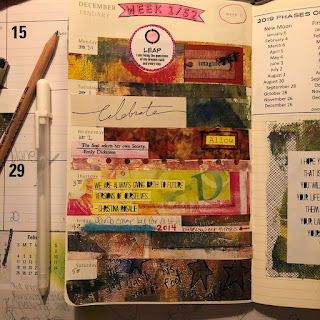 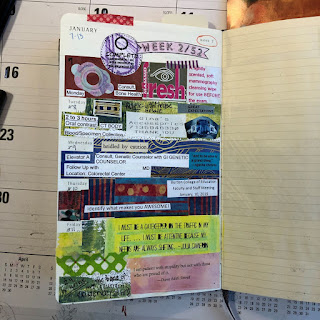 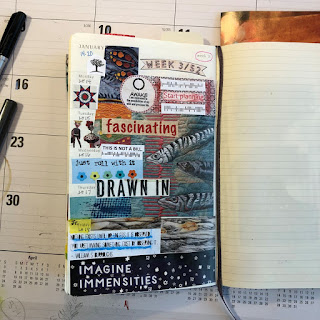 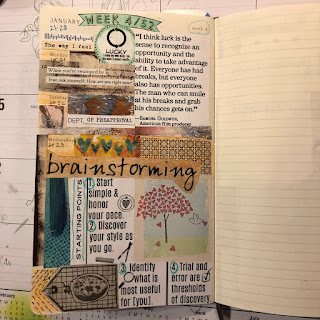 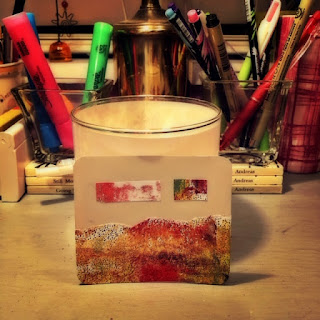 When you look up from writing in your journal and it feels like
you're looking at a tiny abstract work of art
and all it is is
the inside of a security envelope with paint slapped on
and mounted on an ordinary paint chip from the hardware store.
Add the smell of the lilac candle,
and just for a moment or two,
you wonder how life could get any sweeter than right now,
in this moment.
Posted by annie at 10:16 PM 4 comments:

One of the biggest surprises for me in 2018 was my purchase of a used quilting machine. It all came about in what felt like a magical way. I'd only been looking and dreaming about owning a quilting machine for over 20 years. Every once in a while I'd check online listings for machines. On this one day, I decided I'd check Facebook Marketplace. I saw a new listing for a complete setup, and it was located in my area. The price was good. I contacted the seller and we went to take a look at everything. The machine belonged to his mother, who had died over a year ago. It had been sitting in an empty house all that time. There were a few less than perfect spot. Dogs had chewed on the wooden frame. Rodents had chewed the power cord for the machine. In spite of those few issues, I fell in love.

We heard more of the story from the son. His mother had purchased the setup at a Houston Quilt Show (several years back). For a couple of reasons (one of them being that she got sick), she never got the chance to actually use the machine. I wanted a little time to research the machine and the frame, and to check reviews for possible issues with the machine. I told him I'd let him know in a couple of days if I wanted the machine. He'd only had one other person come to look at the machine and she'd decided it was too heavy for her to manage.

I knew I was entering a personal danger zone because the guy was nice, he had a sweet family, and I was in his mother's house with loads of evidence of her craftiness (thread! fabrics! yarn! patterns! loads of stuff!) and I was hearing this sweet woman's stories--and identifying with her. I needed a little space to keep myself from saying I'd take all the things for no other reason than there was a sweet story involved! So I went home to think about it. I dreamed about it and dug around on the internet for more information. I called a couple of days later to tell him I wanted it. I'd asked for a reduction in price, and we "met in the middle" on that request. In retrospect, I could have been less enthusiastic and waited another week or two. By then he might have wanted to pay me to take it off his hands! But I didn't want to stick it to him, and he didn't want to stick it to me. We both got a fair deal.

We picked most of the equipment up the day after Thanksgiving. When I started putting things back together I noticed a few (important!) things missing. For instance, the presser foot was nowhere to be found. Twice, he texted me back to let me know he'd found more things that went with the machine, including the missing presser foot!

Over my Christmas break, I worked on putting everything back together. I watched my DVDs on how to load the quilt and adjust the machine. I had a DVD for the machine and a DVD for the frame. Both DVDs had differing instructions for loading the quilt. It took me several tries (and left me with sore and pin pricked fingers) to get the practice fabric loaded. Loading the quilt is the most important and time consuming part of the whole deal. I had a few mishaps with the practice fabric, one of them being that I kept forgetting to put the blankety blank presser foot down! I've used sewing machines all my life. This was a mistake I ought not to have been making!

I finished my practice piece and decided to "go big or go home" so I loaded one of my quilt tops on the frame. Sure enough, I forgot to put the presser foot down a couple of times. I had to rip those stitches out and begin again. But it all worked out and I was able to complete my first actual quilt top! There is only one small area that should have had a little more quilting because I'd....wait for it...forgotten to put the presser foot down and didn't realize it until I took the quilt off the frame. I'll fix that in some less than perfect way. The good news is, the machine tries to tell me when the presser foot is up and I'm learning to recognize that sound sooner rather than later. I'll get into a very precise order of action that will help me remember to put the presser foot down. Everything is so new at this point and there are so many details to remember before starting to quilt.

I'm going to name her, the machine, but I haven't thought of anything yet. I thought about naming her after the original owner but that seems a little weird. 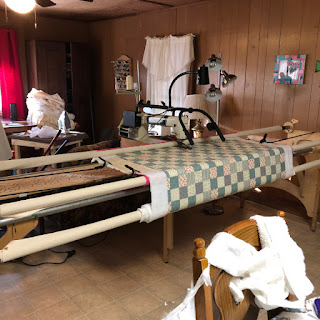 She's not the latest and greatest model but she is simple and easy to maintain. She's also surprisingly easy to maneuver! I have a stitch regulator, but alas, the rodents chewed the cords on that too. For now, I am learning to regulate my own stitches. Maybe one day I'll see if someone can fix the cords for me. Or maybe not.

This room was a bedroom added on to my grandparents' house. A couple years ago, my uncle and cousin detached the room from the house, pushed a trailer underneath the room and hauled it up to our property. My grandmother kept her quilting frames in this room. She would have been tickled pink to see this setup and to know I am sewing in the same space she sewed in. 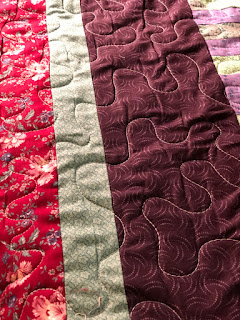 The red strip is the side border of the quilt. The purple is near the top. The edges are the hardest part for me to sew right now. There is too much thinking involved and I tend to slow down, which messes up the stitches. But practice will bring progress! 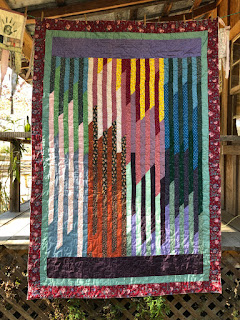 And here is my first completed machine quilted quilt! All that is left to do is to put on the binding. My time ran out so that project will be waiting for me when I return.