Rita, One of Many Storms (and Not All Were Hurricanes) 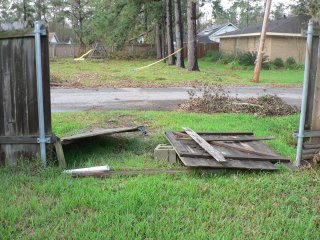 The gap has been closed. 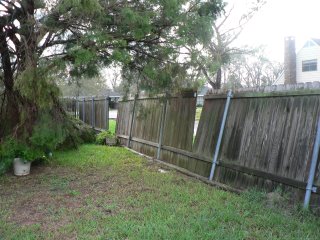 The fence has been straightened. The two cedar trees are dim memories.
It's been a year and I have no words, only fragments of thought that may not make sense to anyone but me:

And yet, in spite of continuing pain, I would have to agree with the man who prayed this morning:

I would also add that it is in the trials that we learn the anchor holds.

For My Friend AMDP --

I made this a few months ago with my friend AMDP in mind (Thanks, AMDP, for introducing me to the Joan Anderson’s writings). She is one of only two of my “real life” friends who know about this blog. I think AMDP reads fairly regularly and sometimes checks out a few of the blogs on my blogroll list. Though we do not see each other often, we have managed to keep in touch with each other in our own haphazard fashion through nearly thirty years (Gasp! Has it really been that long?).

So, A, if you're reading, this one prints up real well. I can send you a copy if you'd like. 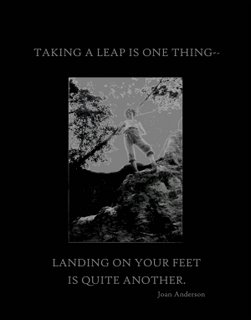 Little did I know when I was creating this that I would be taking my own bold and scary leap of faith.

It all began one morning at work when my husband called and said they wanted to do something for him, and they had intended to talk to him earlier, but didn't, and now, they had to have an answer today, this very afternoon.

Do you know how hard it is to commit to a week-long trip when things are so unsettled at home? Do you know how badly I needed to get away (and hubby too). My heart was saying "thank you God" as I told my husband I would have to think about it and call him back. Actually, about all I could say out loud was "Wow". I got off the phone and called my "guide for proper motherly behaviour", my own mother, and asked her what she thought. She said go for it. I called my older daughter and she said basically the same thing. I was worried that I was being selfish, because things are unsettled with my son (though he is in a protected place at the moment). The last few years have been such a battle, for many reasons, and I can certainly use the break.

I just never expected that my ship would come in in such an unexpected way, but it has, and it is mine, all mine, at least for the week of October 15 - 22! We're goin' on a cruise! We're taking in the Southern Caribbean on the Adventure of the Seas! I am so excited. I am so very grateful.

I plan to take gobs of photos. I plan to read and write. I plan to get up and see the sun rise at least once or twice. I plan to bring lots of sunscreen. I plan to spend some quality time visiting with God on that great big ocean of His.

In the meantime, I will be packing and praying that things will remain calm enough around here so that I am not worried with what I am leaving behind. (I am also praying that through some fluke, we might get a cabin, room, (what do they call those things--quarters??) with a view of the ocean (and a balcony)...now that would be a miracle! Truth is, as long as I am not under the water line, or at least, blissfully unaware of it, I will be grateful. (Jim, do NOT tell me any different!)

(And please, God, no hurricanes. Leastwise, not while I am on the boat, I mean, ship.)

Labels: them thangs I do

So Much Pain in This World 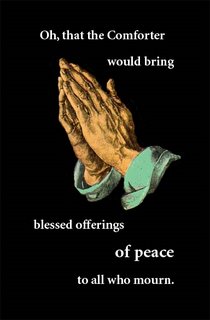 Labels: Personal Favorite, them thangs I do

I've Been Far Too Serious Lately...

I suppose it would make an interesting tattoo. . . 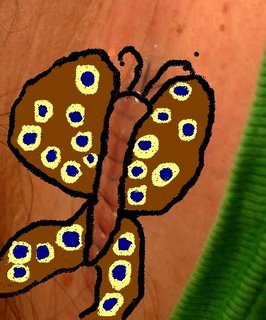 It ain't exactly beautiful (in fact, the scar part is kind of gross!) but it does remind me of that Cynthia Clawson song, Beautiful Are the Scars. I looked all over the internet trying to find the complete lyrics but could not find them. That whole CD, Broken, is a healing and soothing piece of work.

Many thanks to my pal Ayekah for creating this work of art (?) for me (and she did give me permission to reveal the source of this fine piece of artwork.)

For A Limited Time Only

You snooze, you lose!
(Alternate Title: More Than You Wanted to Hear)

(I probably will not leave this post on here for very long.)

I listened to this audio blog post at David's blog and his specifications were that if you listened, you needed to do try and post an audio post too. So I did it, submissive being that I am (just messing with you, David). Besides, I could not let Mindy and Rachel get ahead of me! It has been sort of fun, but honestly, there is some trepidation for me in doing this. I can be insecure and I am self-conscious (too self-conscious for a woman of my age!). Today I choose to be brave. Tomorrow, I may yank the post.

I don't like the sound of my voice! I do have an accent. It sounds weird. My speech teacher said that most people do not like the sound of their own voices, so in that, at least, I suppose I am normal. I think he also said that we do not sound the same to ourselves as we do to others, that is why we are sometimes shocked when we hear our recorded voices.

Here is the meme:

Here are a few afterthoughts:

Can you tell I am a bit scatter-brained and disorganized?

I wrote this several years back. It's supposed to be funny, but it is also a serious glimpse into how bothersome my over-developed Southern sense of good manners can be.

This has been kind of fun. I don't know, maybe I will use it to record myself reading some of my own poetry. Or maybe not. Honestly, I do not know how long I will leave this post on the blog!

(Ok, David, I done it -- But only because I am fifty years old and it is high time I quit being such an insecure little 'fraidy cat!)
Posted by annie at 10:41 AM 15 comments:

After The Storm (The Real Work Begins?) 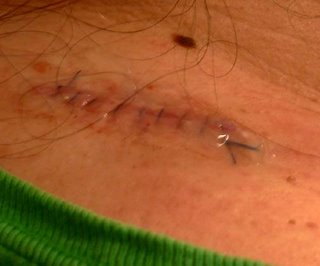 These are my stitches after the dermatologist removed the basal cell carcinoma. The stitches have been removed and the incision has healed nicely. I now have another thin white line, still tender to the touch. One friend saw this photo and said maybe the stitches are too tight and then said that I should alter it to look like a bug and blog about it (I tried making it look like a bug and it did not come out very good). Another wondered, “How many people would experience that picture as an act of genuine (and appropriate) intimacy?” Can you figure out which friend is a nurse and which friend is a therapist? People see things first from whatever perspective is most familiar to them.

There is a question I have been asking myself lately. I suppose the question stems from a perspective that is familiar to me for several reasons. First of all, because of my ongoing dealings with my son's struggles. But also because of other people I know. One lives with a disease that will not be healed, a disease that must be reckoned with on a daily basis. One has a daughter who struggles with unrelenting depression. Another lives with the memory of an unfaithful spouse.

So many people still live with suffering as a result of Katrina. Their lives have been turned upside down, and for many of them, their lives will never be the same again. (For those of you who are "looking in from the outside", let me just tell you that before there was Katrina, there was Audrey, in 1957. There are still people alive today who have very vivid memories of Audrey. Some of them will not even talk about what happened that night. That was over fifty years ago. Audrey's position as the mother of killer hurricanes in the state of Louisiana has been obliterated by Katrina. It is my pragmatic nature that wants to remind all readers that, judging from the affect of Audrey on her victms, the victims of Katrina have a very long road ahead of them, both in terms of physical clean-up and emotional healing. Kind of like dealing with a loved one's addiction, recovery from Katrina will be a long and drawn out process.)

What do we say to God when the storm has long passed and years later we are still dealing with the pain and the debris? I wonder, a year later, what would these people say to God now?

I can only speak for myself, but now, more than ever, I say to Him "You are faithful and worthy to be praised." I have found this to be true, even in the midst of the storm's fallout, even when I do not get my way with Him.