I read Big Magic, by Elizabeth Gilbert. For some odd reason, I didn't think I'd like it. I loved it. This is one of the quotes from the book that seemed important to me (even though, now, it seems rather obscure). 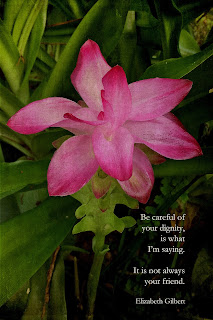 She talked some about doing our art while also doing our day job. It seems to be a recurring message for me right now that I have enough time to do whatever art I need to do in addition to enough time to work a 40 hour week. I spend a lot of time daydreaming about being home and working on creative projects all day.  She says we shouldn't expect our creativity to support us, that we should instead promise to support our creativity, that we can "make art on the side of" our "bread-and-butter job."

Meanwhile, in my day job, I've been busy cleaning my desk area and beyond. I had a couple of drawers that had not been cleaned or emptied since I've been working in this position (8 or 9 years). It felt good to be clearing clutter out and purging decades old paperwork that is no longer needed. I can only hope to be able to bring that industriousness home to my house. Time will tell!
Posted by annie at 9:05 PM No comments:

I recently told a friend I don't cry over books. We were talking about the ending to the Harry Potter series of books. I'd been slow to jump on that bandwagon. I was surprised that I enjoyed those stories as much as I did. Now I want to see the movies. Sometime.

I inadvertently landed on two books about death in a short time frame. The first one, which I have already mentioned, was The Five Invitations: Discovering What Death Can Teach Us About Living Fully, by Frank Ostaseki. He was cofounder of the Zen Hospice Project and he writes of his experiences of being with the dying. I borrowed this book from the library for my Kindle. I like it so much that I've since ordered a hardback copy of the book.

Two of his stories in the book brought tears to my eyes (I do not really consider that crying!). One was about a couple whose young son had died in their home. They wanted to stay for a bit with the body, and the author wrote the most touching recollection of the couple washing the son's body. One of the hard things when my own son died out of state was the waiting for his body to be brought to us. I know he was gone from his body, but I kept thinking about how he was traveling all alone with no one to be with him. And I wondered about how his body was handled by the various people who came into contact with it on his journey home.

The other story was about a female doctor who had grown disenchanted with her work, with the part of it that involved her telling people she did not know (in the ER) that their loved one had died. I can't remember the story well but the gist of it was that the author advised her to find a way to approach the task with intentional awareness. Her father and grandfather had been doctors. She brought her grandfather's doctor bag and her father's stethoscope to her work. When she went to inform someone of a death, she gathered up those two things to carry with her. She needed the reminder of her ancestors to help her make her way. She paused at the doorway, holding the things, taking a deep breath, and walked in to tell the family of the death. She no longer took the task for granted. She was no longer hardened to the task. She was aware and present. I don't know why that story made me tear up, but it did. It was probably something about the possessions of the ancestors she intentionally gathered to help her. I often feel very keenly the presence of my own ancestors. We talk about them and we tell their stories. In this way, they are still with us.

Now I am reminded of Dumbledore telling Harry Potter, "Of course it's happening inside your head, Harry, but why on earth should that mean it is not real?" I loved that quote.

The second book on death was When Breath Becomes Air, by Paul Kalanithi. This one is about a young neurosurgeon who is diagnosed with stage IV lung cancer just as he is finishing his final year of his training. He was in a relatively unique position of being doctor and seriously ill patient. His writing about his diagnosis and his thoughts on his death hit close to home for me (and caused tears to flow). . .

I don't consider myself as having a terminal illness (no more than I consider any of the rest of us having a terminal illness, but there is that quote about life being fatal). But the possibility of that does occasionally loom quite heavily over me. As he said in the book, "Even when the cancer was in retreat, it cast long shadows." So I have this shadow, and in this way, my own diagnosis is a gift, having awakened me to my own mortality and my own desire to live as well as I can (which honestly, quite often, I do not feel like I am doing). I also have the gift of a relatively good prognosis. I do not want to waste it.

I'll also say here at the end, that it's hard work, distilling your life and days down to the values that are most important to you. It's hard to kick the Shoulds to the curb. It's hard to accept (and forgive) your failure to meet up to your own idealized standards.  I keep trying. I keep failing. I keep getting up. And dammitall, I know I'll keep on trying.

"Courage does not always roar. Sometimes courage is the quiet voice at the end of the day saying, I will try again tomorrow." Mary Anne Radmacher.

Have You Seen the Sacred Ordinary?

I've been doing a little reading lately, gobbling stories up like Peanut M&Ms. I've been using the Overdrive app on my Kindle to check books out from the library. I didn't realize I was so hungry to read again. And there's just something that thrills me about borrowing good books from the library without even having to leave my house!

After finishing "The Five Invitations (What Death Can Teach You About Living Fully)", I moved on to "Big Magic", by Elizabeth Gilbert. I wasn't even sure I wanted to read it, but I did, and I loved it. It was very affirming. She helped me (begin to) resolve a few issues about my art/creativity, mostly by reiterating the fact that most artists have day jobs, and they still manage to create (and so can I).

I like this quote from the book, "Perhaps creativity's greatest mercy is this: By completely absorbing our attention for a short and magical spell, it can relieve us from the dreadful burden of being who we are. Best of all, at the end of your creative endeavors, you have a souvenir--something you made, to remind you forever of your brief transformative encounter with inspiration."

It also relieves me of the stress of worrying about things I can't control and cannot change. My mind is absorbed when I am working on creative tasks.

I've been working on a few things this weekend, I got back around to my Kelly Rae Roberts class. I feel somewhat transformed and I have souvenirs! 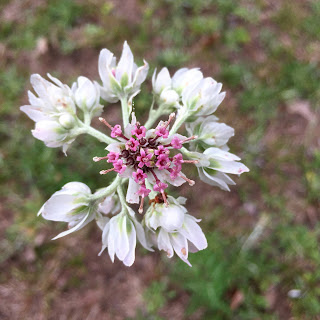 I can't remember if I've already posted this one. It's a souvenir of a weed growing in our yard. The flower grows on a long stem and the bloom is probably no more than an inch wide. They are small but impressive when there are lots of them clustered together. 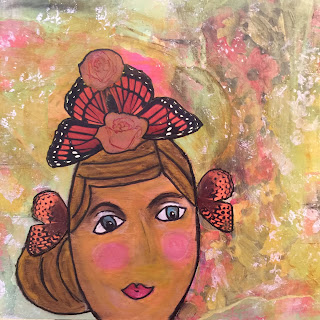 This is my not quite finished "sacred ordinary" angel. I toned down her blush after I took her picture! I haven't come up with her words yet. Or maybe I'm waiting on her to tell me something. "It has to be short and pithy, little girl," that's what I'm telling her. One of the other of us will come through. I just know it.

I drove over to Galveston to meet up with SpookyRach and then went on to spend the night with my sister. It had been to long since I'd had a short little adventure. Of course Rach and I made our way to a cemetery so we could take a few pictures. The next day my sister and I went to visit my favorite cemetery angel of all time. She (the angel!) was much smaller than I remembered (my sister is smaller, too, but that's a whole 'nother story!).

Here are photos from the Galveston cemetery. 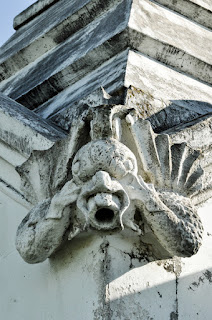 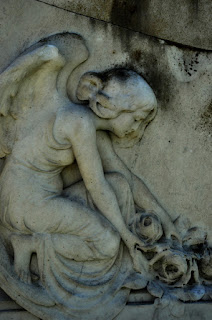 This was a bas-relief piece which was fairly wide but there were buildings in the background so I got in close. I like her a lot too. 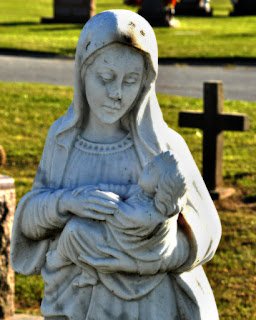 And here are the (phone) photos of my favorite angel of all. 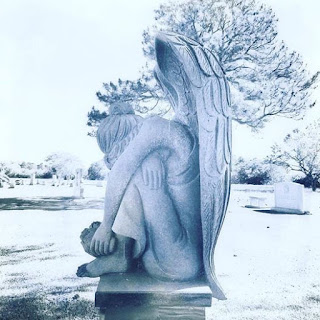 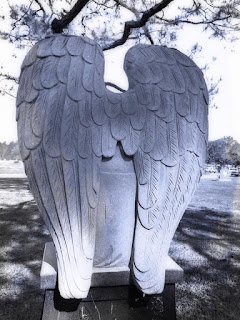 I don't know what it is about this angel that I love. Not far away there were many small graves in an area called "The Baby Garden." That name makes me want to laugh out loud and wail with grief all at the same time. There was another woman there, kneeling in the grass as though in prayer. The tears did well up when I looked over and saw her. The last time I'd seen this statue, my son was still alive. My sister and I talked about young people we knew who had lived short lives and tried to make sense of it all, though we both know you can't make sense of it all. So many things we just can't know and must do our best to accept.

I haven't been doing much more in the way of art. I have been reading a lot. And thinking about writing. My thoughts don't seem to stay collected long enough to write anything. I'm in a bit of a funk, to tell you the truth. So it was good for me to get out a bit and see a different view for a while. I'm grateful I got to go.


"Empty-handed I entered the world
Barefoot I leave it.
My coming, my going--
Two simple happenings
That got entangled."

The book I read the poem in is called The Five Invitations (Discovering What Death Can Teach Us About Living), by Frank Ostaseski. It's a book that is filled with little pearls of wisdom. It's well worth checking out.