(from our weekend, 12.08.17-12.10.17)
Earlier in the week, a friend mentioned the possibility of snow over the weekend. There was none of the usual hype when there is a possibility of atypical weather events for us. I'd read it was going to snow around midnight (one hour), and again around two a.m. (for about two hours). That was a precise prediction. I doubted we'd see snow.
My husband's alarm clock went off at 4:30 a.m. (long story). I woke up and told him I was going to the bathroom and then I was going to check to see if it was snowing. It was! I delighted!
This is the scene that greeted me that morning. And there was more! It snowed. It stuck. We were enveloped in the silence and the brilliance. 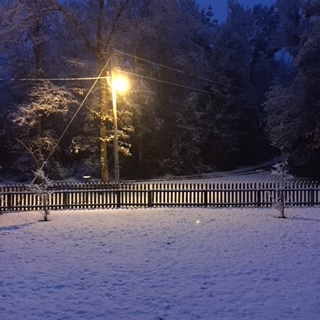 I took the photos below were taken after daylight arrived. I'd forgotten how satisfying it was to walk in crunchy snow. It was hard, leaving my footprints on the pristine ground. I had a little talk with myself, telling myself that the snow was a temporary experience. I admonished myself to enjoy it right now, in the present moment, accepting that it would all melt away. Like life itself. What, you don't have talks like that with yourself? 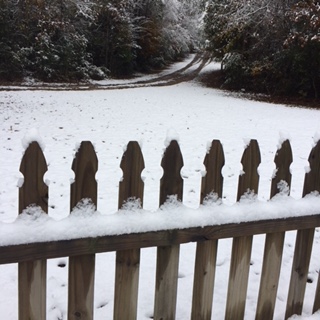 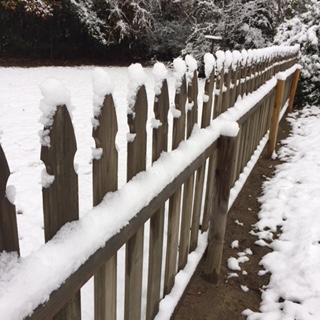 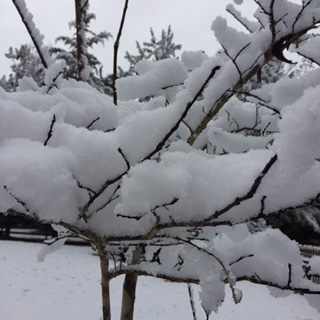 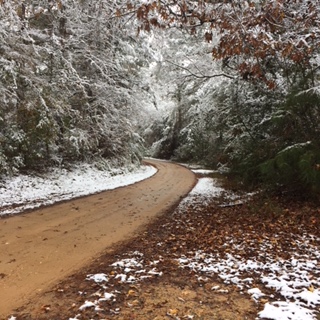 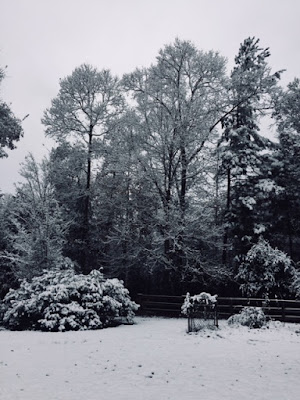 The snow arrived in the early morning of December 8. We were there in the woods to remember my son's death six years ago. The last texts and photos I received from him were about the snow and sharing the snowman he'd built. I still have them on my phone. He was in Pennsylvania at the time. I asked if he'd sent the photos to his sisters. This was the day before he died. I never got an answer. And now, here, six years later, we had snow on the anniversary of his death.

It felt to me like a gift. I was grateful.

Grief often brings surprising little rituals. Rituals that help us cope with the changes in the lay of the ground we walk after a loved one has died. Every December, I go to the student art show and buy at least one piece of pottery to honor my son's memory. I started doing it in 2012 but it wasn't until 2014 that I realized I'd created a ritual of doing this. I can be dense at times!
This year there was a new color among the pieces--the color red. It stuck out more to me since they had several pieces of that color displayed together. And when I saw the red pieces all gathered together, I knew what my color choice would be. All I had to do was figure out which piece I was going to buy. The choice comes down to price and personal aesthetics. There was a lovely red platter that appealed to me, but the price was too steep for me. 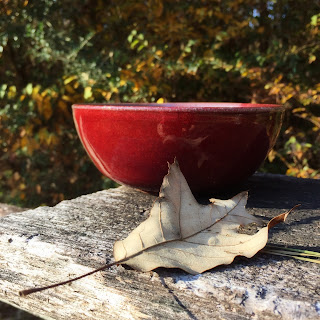 After much debating with myself, I ended up with this red bowl. You can just barely see the lighter color at the top edge. It's basically half red and half that lighter color. 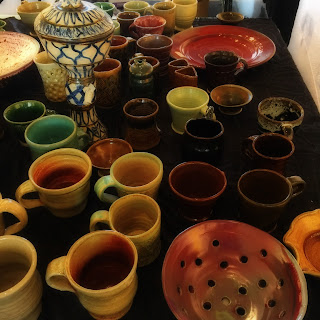 Some years, I go later in the day and there isn't much left to choose from. I went early this year and they had plenty of mugs for sale. That big red platter (shallow bowl?) in the upper right corner of the photo was the one calling my name. But because of my budgetary constraints, I resisted its siren call. 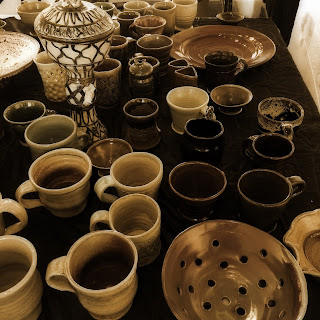 Here is a sepia tone version of the photo.

Friday will be the sixth year. It doesn't seem possible. Now there are more smiles and laughter at the memories, and fewer tears. I'm grateful.
Posted by annie at 7:36 PM 8 comments: