Seeing the Good, For a Bit

For several years now, I've known about and lusted for a Traveler's Notebook to use when I journal. Some of them are expensive (and that's the ones I liked best) and I was never able to justify the money on something as seemingly trivial as a notebook. Plus, I didn't know for sure what size I wanted and since it was such an investment, I did not want to take a chance on being wrong!

Then I discovered a group on Facebook where they bought and sold the brand I wanted. The first one that popped up at a price I was willing to pay was the larger pink one in the picture. Someone had tried to decorate it with ink circles and splats and didn't use permanent ink. I expressed my interest and ordered it. Then I began to sweat bullets because the owner had put a sticker on the front (that I did not want to keep on it). I'd asked her if she would remove the sticker so I could see how bad it was underneath. Although she said in her original posting there was no damage to the leather under the sticker, she wouldn't remove the sticker for me, saying she didn't want to damage anything. So while I waited for my shipment to arrive, I imagined how ugly whatever that sticker was hiding was and chided myself for being so foolish as to purchase the darn notebook (years, I tell you, years I looked at these notebooks*). But it was love at first sight when the notebook arrived. I carefully pulled the sticker off and what was revealed was nowhere near as bad as what I had imagined (isn't that so often the case?).

On that very same day, the smaller pink one was listed. I ordered that one too (though I had no idea what I was going to actually do with it)! This one was very new and had no blemishes on it. That made me nervous (and still does).

The green one was listed about a week later and I decided I needed that one too. I'm using it for a wallet and that is working out very well.

What I like about buying used is that they notebook already has a bit of character to it. I don't have to worry about protecting it like I do with the pink one. I really doubt I'd ever buy one brand new for that reason.

So I've been busy writing and doing collages and other things for my own entertainment in these notebooks. It's therapeutic! 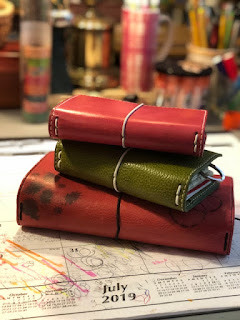 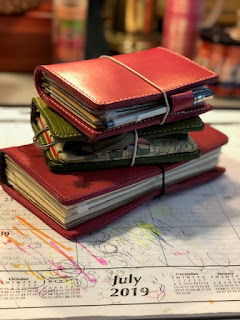 The pages in the larger book are long and narrow, so I am somewhat limited as to what I can do in the notebook, but I do enjoy adding color here and there. This is a page I did not long ago. 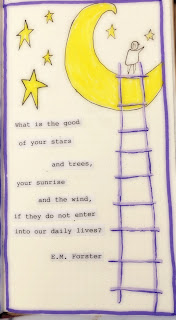 The quote is "What is the good of your stars and trees, your sunrise and the wind, if they do not enter into our daily lives?" (E.M. Forster)


* When we were first married, I found some bedroom furniture that I wanted. We couldn't afford it at the time, and I visited my furniture at Sears many times. There was one old guy who would always come and try to sell the set to me. I told him I wasn't ready to buy just yet, but when I did, I would be sure and ask for him (at the time, my husband was selling and getting commission so I wanted this guy to get the commission, if there was any). I'd go look, come home and measure our teeny-tiny bedroom and ponder just how many pieces I could fit in the room.

The day finally came that we were ready to buy. My husband and I went together to Sears. We got there, and asked for the salesman who'd been so patient with all my looking. Poor guy had up and died on me! Another salesman got lucky that day. I hope he breathed a silent thanks to the other salesman.