"Show up and Shut Up" 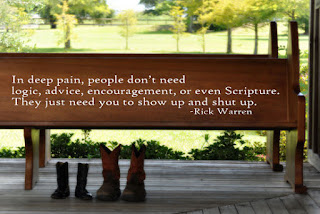 (My son's first, and last, pair of boots. Photo taken at a picturesque little open air chapel, a very peaceful spot for me.)

I've seen this quote several places in the last week, with people passing it on from Rick Warren's Facebook page.

These things change your life. And you learn things about how to comfort others, things you might never have learned any other way. But it's a high price to pay for the privilege of learning.

It takes a special kind of person, a hardy person, to be able to "show up and shut up" and, I would add, sit with, a person in such deep pain, in that place where there are often so many unanswered questions.
Posted by annie at 4:54 PM

Labels: Grief, them thangs I do