My son's best friend came riding up one day on a brand new dirt bike. My brother had a small street bike and a mini-bike so I'd had some experience riding. It had been years since I'd been on a dirt bike so I wanted to take a little spin around the yard. I wasn't brave enough to get out on the street. I went slow but it left quite an impression on the kids. My oldest, who was 12 or 13 at the time, decided if I could do it, she could too. Her brother and his friend helped her on the bike and started giving instructions.

They had a whole story to tell. My daughter didn't realize she needed to hear the whole story and then act. So when they told her to hold the clutch in and turn the throttle, she did. And when she started rolling, things went downhill fast. She squealed. She headed straight toward the building in our back yard. The whole event only took about 30 or 40 seconds but it lasted long enough for her whole life to pass in front of my eyes. Once that started happening, I hollered at her to "LET GO, LET GO!!!" She was squealing up a storm and didn't hear a word I said.

Finally she managed to wedge it between the corner of the building and an old light pole beside it. When she hit, and the bike stopped, she jumped off and ran like the wind toward the patio. We were all dumbfounded for a minute. We recovered and ran to check on her. I sent my son's friend to check on his bike. I was afraid it was torn up, but it wasn't. When I got to the patio I asked if she was okay and she was. When I asked why she ran away so fast she told me it was because she was afraid she was going to be electrocuted.

I don't believe she ever got within spitting distance of a motorcycle after that. 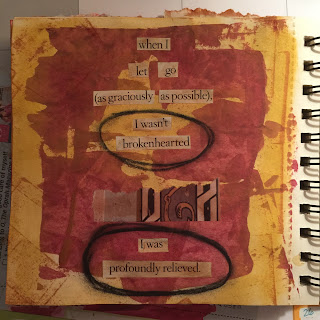 This was one of my favorite collages from my recent 40 day project. I thought of the motorcycle story not long after I'd done this one. I was profoundly relieved when my daughter let go that day.