I don't normally care for parades and such. It is too much trouble getting a place to park and staking out a spot to stand where you can see (I am a fuddy-duddy at heart). But my daughter was marching yesterday and I went to see her march. It was not a big parade and the crowd was thin where we were so I enjoyed myself in spite of myself.

This guy has it made. He is in his front yard, relaxed and ready for the festivities to begin. 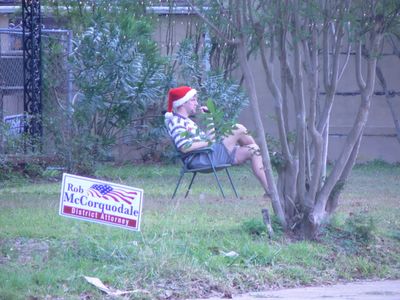 Parades (and the National Anthem being sung at a sports event) sometimes make me teary. I don't know why. For the parade, I believe it was the combination of the military guys (knowing so many young lives have been lost and so many families have been touched by the grief that war brings) and the first marching group was a young group of ROTC kids, which reminded me of where my son was last year about this time (in a military type program and slowly adapting, until after Christmas break when he decided not to return), and a "Relay for Life" float (my brother died several years ago this month from cancer), all within the first ten minutes of the parade. I felt like sobbing, but I didn't. How does one explain the presence of such grief in the light of an event that is supposed to be cheerful and festive? 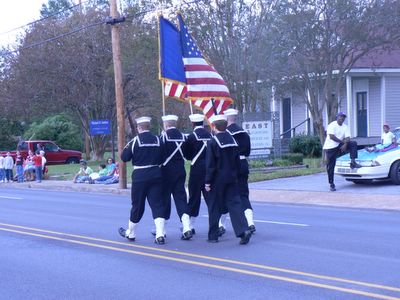 This is why I came to the parade in the first place, to see my daughter march. After they passed, my mood began to lighten and I started taking pictures. I tend to feel self-conscious with a camera hanging from my neck, but I am getting better at tuning out the outside world and just taking photos without thinking about what other people might think (There is an old post from December 13th of last year ("My Camera is a Jack-Ass") that sort of explains my problem with cameras).

I seem to have a preponderance of accidental boody shots in this round of photos. 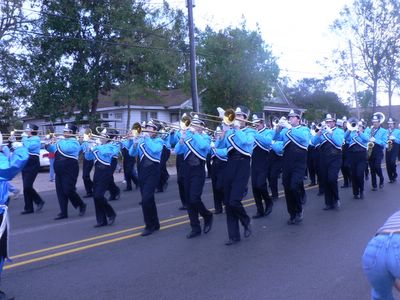 We had the standard reportoire of dance teams. I think this one came over from Houston, TX to march in our parade. 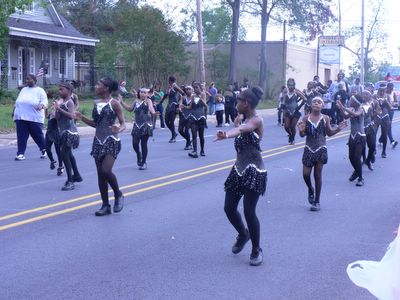 These guys were talking and laughing and never missed a beat. 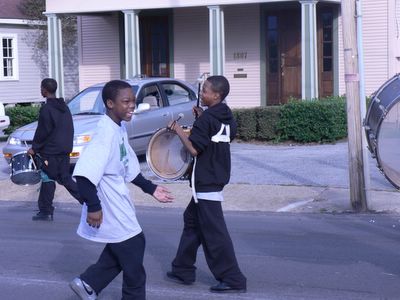 Here we have a serious fashion faux paus. Boys and girls, never ever wear this type panty hose with a shimmy-tail dance costume. Also, make sure there are no runs or tears in your hosiery. I would have gotten a picture of that too but my digital camera was a little slow on the uptake, so I missed the shot. 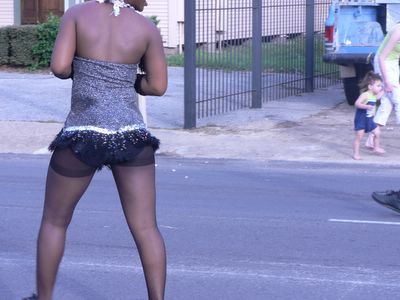 Here we have the cheesy football helmet on a Bronco vehicle. The guy driving this vehicle actually wants me to vote for him for District Attorney. 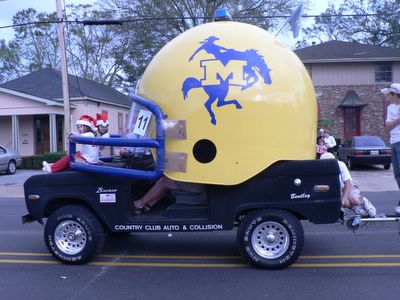 Hmm, I wonder if she is a Marine? 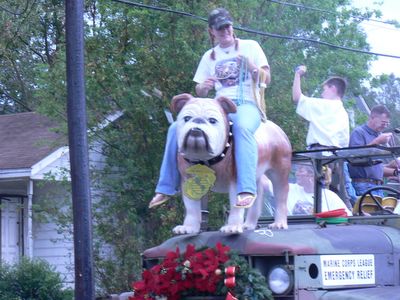 When I was taking this photo, I was wondering, "what in Sam Hill is that green pile of mess suposed to be?" After I saw the photo, I realized it was a Christmas tree, complete with MRI packages. I was more intereted in the Marine Corp and Navy (?) Gators. I'm not sure where they reside when they are not riding on the back of a flat bed trailor in a Christmas parade. Notice the Marine Corps gator has his snout full of beads for the girl to toss. (Which reminds me of a question -- Do other parts of the country toss these cheap beads in their parades, or is that a Louisiana thing? I've seen it done mostly in the Mardi Gras parades.) 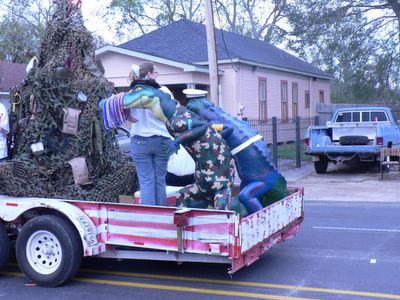 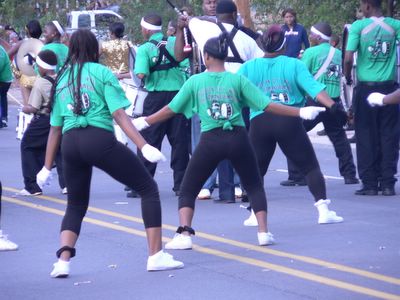 Do you think the girl in dead center knew I was taking this picture and posed for it? That is the problem with taking pictures of people, you know. They see a camera and they get all stiff and start posing. I had to fuss at my father on Thanksgiving for stiffening up just because I was taking a picture of him. I do the same thing, I put on my picture face and then I hate photographs of me because I look like a stiff old battle axe (my daughter says, "well mom, that's what you are", which reminds me that I need to loosen up a little). 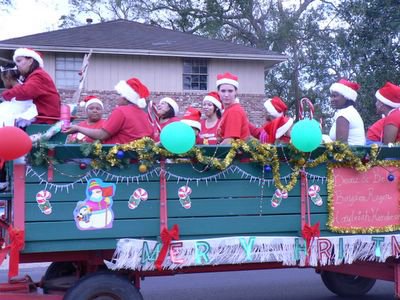 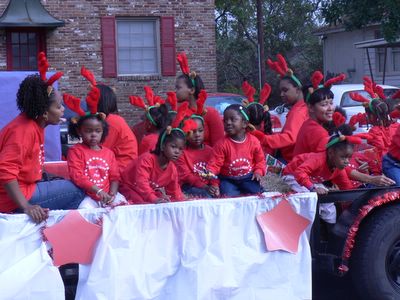 or plopped down on the hood of a car, waiting for candy to be tossed their way. This little guy is actually looking the wrong direction. (Wonder how many times we ourselves miss the good stuff in life because we are looking in the wrong direction?) 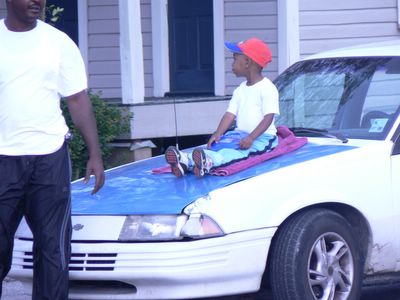 My daughter dubbed this little guy "Mullet Boy". He knew which direction to look, and with the help of his mom, he gathered a sack full of candy. 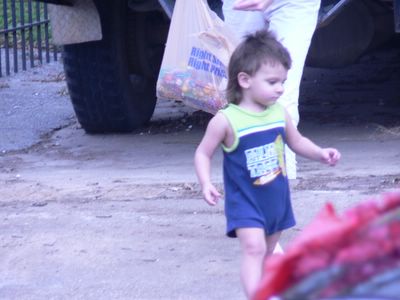 But when the last float passed by and Mama gathered him up to go home, he had himself a little hissy fit. (Wonder how many hissy fits I have thrown when I realized I had to let go of something and I was not ready to do so?) 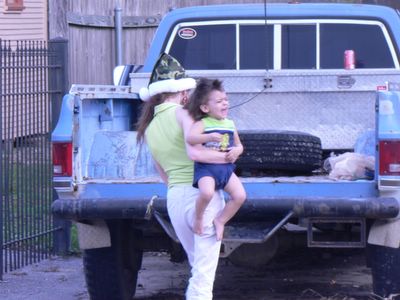 And how many times have I complained when the gig was over, and it was time to start the clean-up duties? 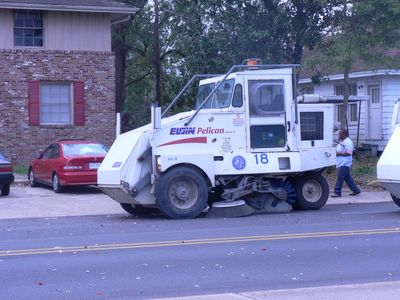 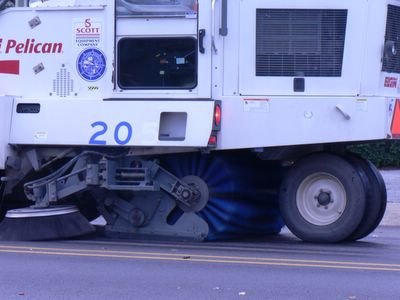 Imagine my surprise when I pulled my eye away from the lens of the camera and I noticed this float was sponsored by the local community college I attended last year. I was searching for familiar faces when I saw my speech teacher tossing what turned out to be a DumDum sucker with a tag on it that read "We're back. Better than before.", which is a bald-faced lie. They got hit pretty hard by Rita. The fall semester had to be cancelled. They are back, but they are limping.

Anyway, the speech teacher was quite entertaining and full of extra information that is usually not appreciated by younger students. He used to travel around the country giving motivational speeches. I have often wondered if hearing one of his speeches would motivate me to action. I always thought he'd be an interesting person to converse with. He also has a list of things he wanted to do before he dies, things like visiting the grave of Marilyn Monroe. I have wasted so much of my life flying by the seat of my pants. People who live with specific goals and timetables in mind tend to fascinate me.

Anomalies also fascinate me, and he is one. He makes these speeches all the time and makes it look so easy. You would think he was a social and outgoing person, be he confessed one time that he is actually shy and quiet when in a group of people he does not know well.

I asked him once if he thought there was any chance for a person to get their act together if they had not done so by a certain age and he said he thought it was unlikely. Again, I have wasted so much of my life flying by the seat of my pants. "Unlikely" was not the answer I wanted to hear.

Now, a word about photography. Apparently, sometimes you get caught up in the moment and you are concentrating so intensely on what you were trying to catch with the camera (the float) that you completely miss the elephant in the frame until you have uploaded the photo. (I wonder how long I have been walking around the elephants in my life?). 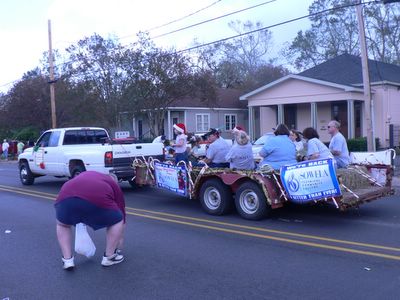 Honestly, another boody shot was not my intention. But then again, if you check the archives in February 15th ("Ice Carving, Louisiana Style"), you will find evidence that I seem to enjoy boody shots. As I said back then, what can I say, I mean, other than...